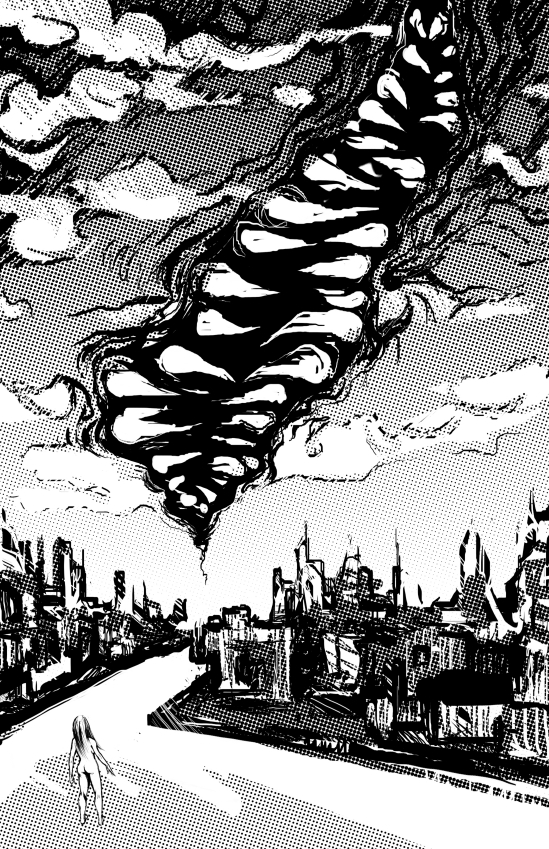 I always have to stop and look at the sky over the University, at the lenticular shape torn in reality that hangs above it, pulsing black and empty over silent causeways and high over Administration, First and Second Science, and the Art Wing donated sometime in the past century by the Pickman family. Over trees that never infloresce or sprout leaves anymore, lawns that remain grey and tangled and desolate. The whole area is like this, most of Arkham proper and Innsmouth are walled off and patrolled by the military. Even some of the surrounding rural areas have been evacuated. Arkham itself has been a ghost town for the five years since the accident in the basement labs, that I was once supposed to be a part of.

There is an eclipse every day, here, when the sun passes behind this rip, and night falls for a brief time, fifteen, twenty minutes at most. We have not so far been able to record what happens in this shade; sending a person failed spectacularly the last time, and it seems that even electronic equipment can’t really handle it.

I try to be back at the van when this happens, a brief respite from the containment suit and the proximity display, my load of sensory and recording equipment. There’s time for lunch, maybe, and some nervous joking with the military guys who drive the truck full of expensive equipment there and back to a safe distance. I know that my presence makes them a little uneasy, especially after the first attempt to ask me out, when I told Dennis or Daniel or whoever-politely, mind you-that I wasn’t interested in men. They also don’t know what to make of me because I initially volunteered for this though I am getting quite a bit of hazard pay.

I don’t talk to them too often. Just enough to not make it worse for everyone.