As Seen On Geek And Sundry!

Last night the wonderful ladies of the Vaginal Fantasy book club revealed that their official book pick for September is CTHULHUROTICA.

(And then our editor, Carrie, freaked out a little bit, but she’s okay now.)

This means that Felicia Day, Veronica Belmont, Bonnie Burton and Kiala Kazebee will be reading our book this month, and discussing it with their viewers and fans on September 25 at 8pm Pacific time via a live chat.

If you’re new to Cthulhurotica, and found us through VF, welcome! This anthology of short stories is published by Dagan Books, a small press founded by the book’s editor, Carrie Cuinn. The book is meant to show that women, people of color, and people of different sexualities have a place in HP Lovecraft’s Mythos universe – even if Lovecraft himself didn’t think so. You can buy our book here, and follow us on Twitter or on Facebook. We have interviews with the authors too.

We’re also planning a second book in the series, which (like this one) will contain all original stories and art. That’s being put together by Carrie Cuinn and Filipino-American author and editor Don Pizarro (who’s story, “The C-Word” appears in the first book).

Thank you for stopping by, and we hope you enjoy our book! 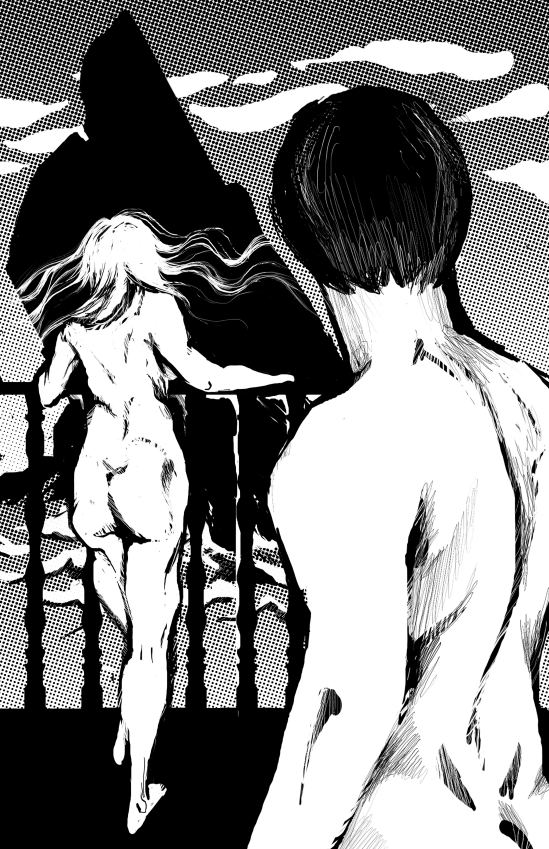 It had been eleven months since I’d last called Anna. One day, she’d stopped answering her phone, and eventually I stopped trying to get through to her. I’d mostly stopped thinking about us until her corner of Massachusetts caught the edge of a hurricane. For three days, I resisted the urge to call.

I never thought she’d call me.

“I knew you’d be worried,” Anna had said.

“I was,” I said, shocked into honesty by the realization she’d actually given me a moment’s thought.

We spent most of the time talking about the storm’s aftermath. “Arkham’s flooded,” she said. “They canceled classes at Misk until further notice. Newburyport’s a mess….”

“Innsmouth pretty much got through it unscathed,” she said.

Not the answer I was looking for. This didn’t surprise me. Neither did Innsmouth’s shelter from the storm, despite the town being situated right on the coast. After its revival in the nineties as a place where artists and hipster students with trust funds – like myself – could thrive, nothing could slow Innsmouth down. Not its own sordid history, nor the recession, not even the weather.

The tired old joke was always, “What did Innsmouth sell its soul to this time?”

We did some perfunctory catching up and had gotten to the part where we both mentioned about how little had changed in our lives over the past year, when I blurted out, “I want to see you.” I hung my head down between my knees and waited for another rejection.

“Eliot,” Anna said with a sigh.

Thanks to the success of Cthulhurotica and the support of its readers, we have decided to go ahead with plans to produce a second volume. This will be an open anthology, though we hope to invite back some of our favorite authors from the first book.

Submissions will open later this year, and there will be plenty of news and ideas posted here before then. If you think you might want to submit, but haven’t read Cthulhurotica yet, please pick up a copy today! Our 344 page paperback is only $13.99, available here from Amazon. Both the Kindle and .epub versions of the book are still only $3.99. Get yours today!

Original Hometown, if different: A small ‘burb on the shores of beautiful Lake Erie–which did not catch fire by the way.  That was the Cuyahoga River.

What’s your favorite H.P. Lovecraft story or other Mythos story? Actually, it’s Rod Serling’s adaptation of HPL’s non-Mythos story “Cool Air” for the series Night Gallery — a subject I plan on delving into for a future nonfiction project!

What comes to mind when you think “Lovecraft” + “Erotica”? I had the image of C’thulhu’s tentacles in various orifices.  Which, because of my lack of familiarity with the Mythos, actually turned me off.  Not that I’m against things in orifices by any means, but the thought of writing “‘Lovecraft’ + ‘Erotica'” required a knowledge that I just didn’t have – at the time.

How did you hear about Cthulhurotica? Right on the heels of my last “weird erotica” publication, I heard about this other one through the editor talking about it on Twitter.  I guess my eyes were just peeled for anything called <genre-trope>-rotica.

What inspired your story? Having resolved that I wasn’t going to write for Cthulhurotica, I decided it was long past time that I at least found out more about H.P. Lovecraft.  Especially since, several weeks before I heard of the anthology, I’d taken the name “D.P. Lovecraft” for my role as a Non-Skating Official in my local roller derby league.  Anyway, I started by looking up “Deep Ones” on Wikipedia, and then the ideas just started rolling in.  So much for my resolve.

What music or movies helped you to write this story? My soundtrack for “The C-Word”:

How many rewrites did you do before submitting? Three or four, at least.

What is your favorite bit? The point at which the main character, Elliot, starts to get a glimpse of everything he was inadvertently fighting for:

Anna slipped her hand from mine and faced out toward Devil’s Reef.  She cupped her hands and shouted some words I couldn’t understand, but that reminded me of her mumbling last night.  And unless I was hearing things, she was answered, from the Reef, with the most bizarre and disturbing sound I had ever heard.